April 17, 2014 -- Bessemer AL -- David Boyd, CEO of Vulcan Painters, is helping to recruit painting contractors to blast and paint tanks and helicopters for the National Armor and Cavalry Museum at the new Maneuver Center of Excellence at Ft. Benning, GA. Situated on 30 acres next to Patton Park, it will be the largest U.S. Army Museum in the world. Tanks from the army's earliest years through the post-World War II era are being moved from Ft. Knox, KY, to Ft. Benning, GA, where they will be displayed. The Museum will take a central role in supporting unit organization and soldier history and heritage. It will also provide the public with a historic window into the Army, its mounted warriors, their history, and their role in national development.

When Lt. General John Sylvester, (retired) came across the problem of rust on the tanks and helicopters to be displayed, he remembered the opening ceremony speech he gave to the SSPC-Society for Protective Coatings convention several years back. "I was really impressed with the professionalism of the members, suppliers and staff of that group," he said. "I knew I needed these people to solve our rusting problems."

Contacted by the leadership of SSPC, Boyd agreed to visit the site of the future museum in the fall of 2013, and is now recruiting help for the project through his longtime association with contractors and suppliers. 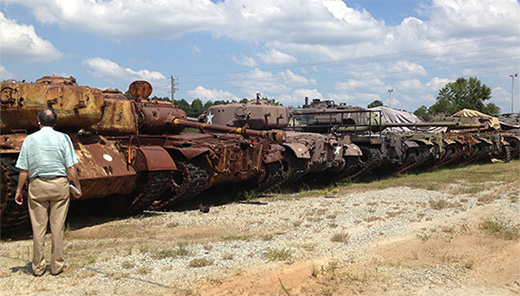 The task of the project is to set up containment, to blast and to paint seven tanks and three helicopters, after they arrive on their permanent concrete display pads at Ft. Benning.

What is needed is containment, paint, abrasives, moisture control, air and blasting equipment, as well as project management and labor. While cash donations will be accepted, "in kind" donations would be best. If the foundation can get 10 contractors to commit to doing one unit each, the project would be on its way.

For more information, to donate or to volunteer, go to www.armorcavalrymuseum.org.