But his eye went immediately to the M48A1 tank, which was in service from 1953 to the 1990s and was the primary battle tank used during the Vietnam War by both the United States Army and Marine Corps. His late father-in-law was tank commander of an M48A3 model used by the Marines. "We had the opportunity to pick a tank," he said, "and I said let's take this one, my father in-law operated this, let's do this one instead, and give him a little tribute." 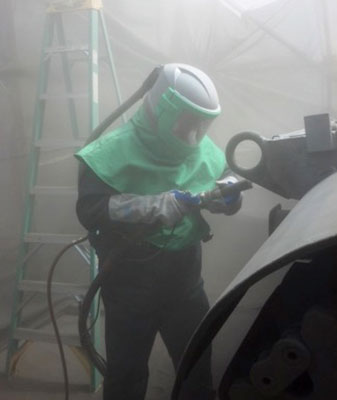 Blasting the M48 inside the containment

Abhe & Svoboda is among the industrial painting contractors David Boyd , CEO of Vulcan Painters, Inc., has recruited from around the country to paint the tanks for this National Armor and Cavalry Heritage Foundation project. The contractors are donating their time and expertise to paint the tanks in preparation for service representing the armor and cavalry collection, and raising awareness of the need for the new museum, to be located near the National Infantry Museum and Patton Park at Ft. Benning.

Rick Pendleton, Abhe & Svoboda corporate safety director, also has a personal attachment to this jobâ€”his brother, who has passed away, was stationed at Ft. Benning, and he retired from the Army after a full career as a colonel. Members of the Abhe & Svoboda team flew in from all over the United States to paint their tank; Rick from North Carolina, Dan Markwell from California, Don Holle from Minnesota, and Zach Prachar and Shawn Landowski from Louisiana.

That kind of personal involvement and good will has been present in many of those involved with the project, which is aimed at getting these tanks renovated before the official launch of fundraising for the new museum. "It's an honor for us to show our appreciation for people who served for us," Don Holle said. 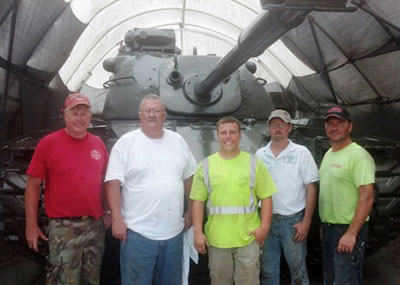 The Abhe & Svoboda crew with their M48 A1 tank painted

The M48 Patton tank had to be abrasive blasted in a containment built by Vulcan Painters, when the Abhe & Svoboda crew arrived early on Monday, August 4. The crew worked in 95-degree temperatures in the Georgia sun last week, and inside the containment Holle, who is Vice President of Abhe Svoboda, took readings for ambient conditions and recorded temperature at 111 degrees. The temperature on the surface of the steel tank was 114 degrees.

Assisting with the setup of blast cleaning equipment was Steve Golak from Mohawk Industries, the supplier who donated the blast media. Golak drove from Minnesota to Ft. Benning to help with the abrasive cleaning operation.

The painters from Abhe & Svoboda used Mohawk's Hornet 30-60 and 80 mesh, which Holle said cut right through the old paint, and they removed 24 to 30+ mils of coating. "We're making it look pretty shiny," Holle said. "The people at the restoration facility are happy." 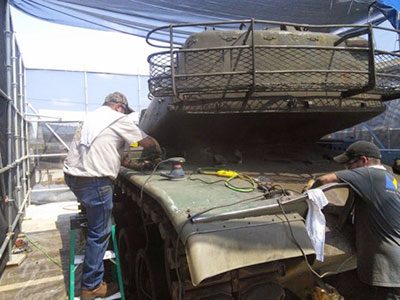 A crew from Main Industries of Hampton, VA, was also on the Ft. Benning site last week, working on the M60A3 tank, a model developed from the M48 that was in service from 1961 to 1997, and the Army's primary tank during the Cold War. Used for decades by the U.S. and its allies, It remains in service in many countries today. The M60A3 is the most modern tank in this collection. All seven of the tanks are undergoing a process to seal openings and hatches, to take off sharp edges, and weld up man ways to make them more childproof, and get the tanks ready for their role as monuments.

"The heat has been really brutal," said Martin Thornton of Main Industries. Standing in the sun without a roof over the containment, surface temperature on the M60A3 tank registered 140 degrees at one point. The three-man crew of Martin, his son Tray Thornton, and Brent Higgins, all from Baxley, GA, found their tank was in worse shape than they thought after they pressure washed it. It required substantial hand and power tool cleaning. The tank had pits and scratches from its service and rough welds from repairs that needed to be knocked down, said Tray Thornton. They were able to complete all prep work, including caulking, applying bondo, masking, foaming and other weatherproofing and childproofing work, and spot prime it with Sherwin Williams epoxy by Thursday. On Friday they completed the first coat of Sherwin-Williams CARC coating system in green on their tank, and will continue with additional colors for camouflage August 11.

"We did a lot of caulking and sealing holes so if it rains, rust won't get on the inside, and used silicone to seal up nuts and bolts and openings," Martin Thornton said. "The green just made it look 100 percent better. We took time spraying it so there are no runs and sags. We wanted it to look almost like a car paint job." Tray Thornton said that the team has a specification and will follow a line guide with landmarks on the tank as they add the other colors in the camo pattern. He added that this project is a nice change from their more typical jobs on large crews repainting battleships in dry dock. 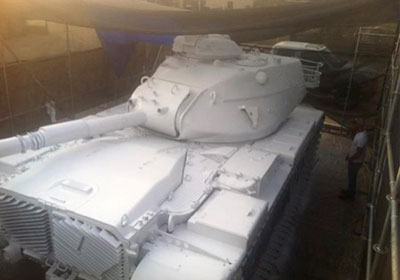 Len Dyer, director of the National Armor and Cavalry Museum said that the tanks selected to be outside monuments around the site where the armor and cavalry museum will be built were chosen with an eye toward having both some cavalry vehicles, which are aluminum, and the armor vehicles which are steel, as well as a mix of time periods. Though the World War I tanks were too thin skinned to be parked outside as monuments, the World War II tanks were made of thicker metal and can better withstand the outdoor weather elements.

On July 31, Reggie Clements of Vulcan Painters primed and painted the first of the tanks, the M114 Command and Reconnaissance carrier. The M114 is a Vietnam War-era armored fighting vehicle.