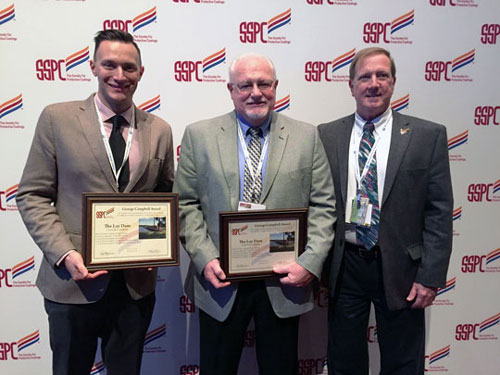 Roger Yeargan, Hydro Manager of the Lower Coosa Hydro Plants for Alabama Power, attended the awards ceremony with Vulcan Painters managers to receive the owner’s award. The George Campbell award is given to honor outstanding achievement in the completion of a difficult or complex industrial or commercial coatings project.

The project work involved creating an ICRI CSP-3 profile on concrete floors and repairing them before painting with a 3-coat self-leveling epoxy system. Painters performed lead abatement on parts and machinery using SSPC QP-2 protocols and containment, and scaffolding was built to reach many areas of the powerhouse. An aerial lift was brought in for access to wash the cornice and the brick exterior of the powerhouse.

All the work was done with careful attention to retaining much of the building’s historic significance while updating a working dam and powerhouse. Lay Dam’s 100-year anniversary was celebrated by Alabama Power Co. shortly after the project was completed.

Vulcan Painters won a George Campbell award in 2011 for the repainting of the statue of Vulcan for Vulcan Park and Museum and in 2010 for painting six historic rockets at NASA’s Marshall Space Flight Center in Huntsville.