For the third year, Vulcan Painters Inc. is a proud sponsor of Vulcan Park and Museum’s AfterTunes, a unique musical event atop Red Mountain on Sunday afternoons in the fall.  This series of three concerts in the park features local and national singer/songwriter acts that appeal to all ages.

Vulcan Painters supports the Park’s efforts to educate visitors about Birmingham’s industrial history, and about the production of iron and steel and its influence on the development of the “Magic City.”  As a company specializing in the prevention of corrosion in steel structures and all types of metal products, Vulcan Painters supports the mission of this unique park and its cast iron statue of our company namesake.

Pizza, beer and soft drinks are available for purchase.  Concerts start at 3 p.m. rain or shine, and seating is first-come, first-served.  Admission is charged:  $10 General Admission; $5 Vulcan Members; $4 Ages 5 -12; and free for Children 4 and under.  Ticket price includes admission to Vulcan's Observation Balcony and Museum.

For more details go to www.visitvulcan.com. 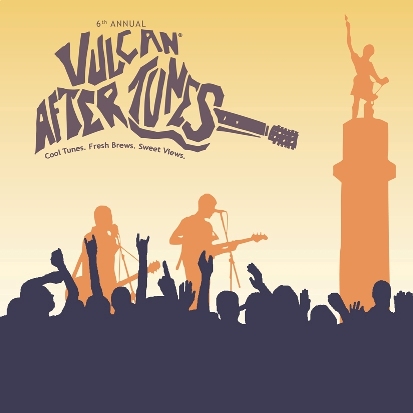