Special issues: The schedule of school swim practices and events at the aquatics center had an impact on this project. Although the competition pool was painted during the summer, painters had to be done as quickly as possible so that practices could resume.  The instructional pool was painted during the fall semester and had to be completely contained, keeping blast media and dust from the public.  Estimating had been completed when the pools were full, and when it was drained, the smaller pool was in worse condition than expected. This made it necessary to abrasive blast the pool shell to leave a profile, grind pits, and follow with a thorough 6,000 psi pressure water blasting.  When painting was completed, painters found a 2 ft. by 2.ft. section where coating continued to bubble up.  Investigation revealed a crack that was allowing water to leak through the concrete substrate behind the coating.  The leak was routed out and allowed to drain, then repaired with a cementitious crystalline waterproofing and then repainted with primer and topcoat. 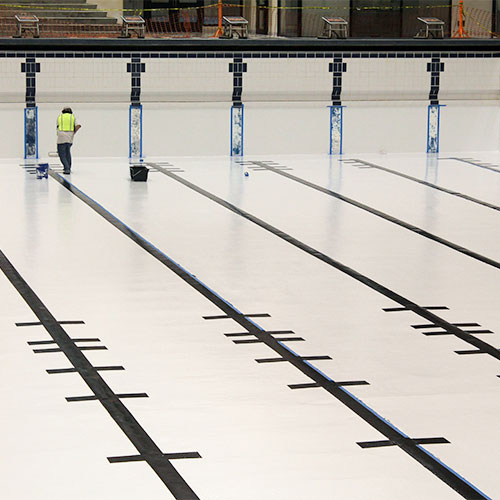